A Troubleshooting YarnPull Up A Seat, and I'll Weave You A Tale

So the other day, I started writing braid. It's an implementation of the HTTP RFCs (723x). You see, I want to write web APIs in C.

I know, I know, I should use a more modern language. Or a memory-safe language. Or some other such nonsense. I have been in this industry long enough, I shall do as I damn well please. Besides, GitHub is big enough for all of us.

I started in on the guts of RFC 7230, the message syntax, and banged out a parser with a sliding window buffer. It worked pretty well, and was quite flexible, if I do say so myself. The design hinges upon the idea of strands, the small bits of a string that we can read with only a small, fixed-size buffer to range over.

That's less than a hundred bytes. It's super easy to parse, too: just read the whole thing into a 1k buffer and go to town.

But what happens if some jerk out on the internet sends you a request like this:

That's definitely not going to fit in our 1024-byte buffer. Or our 8192-byte buffer. Or a 64k buffer. At some point, if we keep making the buffer bigger, the world cranks out a bigger prankster trying to crash our software, looking for a laugh at best, or an RCE at worst.

What the braid parser does is keep track of a single strand, which contains the chunk of a string we've seen so far. When it runs out of buffer, but hasn't finished parsing a request, the parser measures off enough memory, copies out the parsed data, and appends it to the current strand. 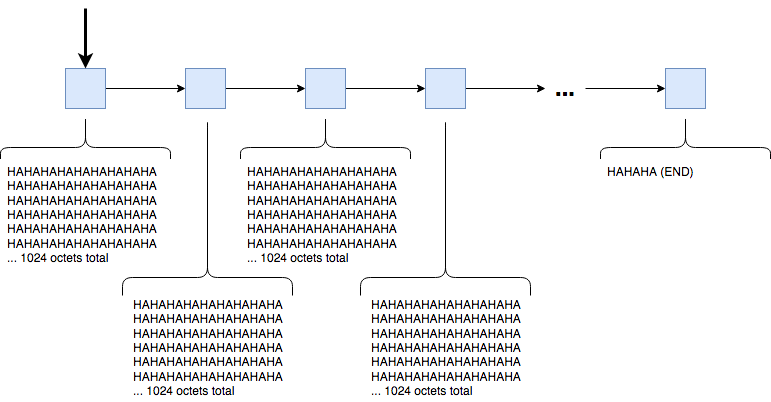 I wrote a small test-suite that exercised various edge cases for this stranding design, varying the length of the URI from 100 characters to 19,000 characters, and then doing the same for a header value, a header name, etc.

A beautiful feeling. But this is an essay about troubleshooting, by gum, and for that, you need trouble. My trouble started when I noticed the off-by-one error that lead me to stop at 19,000 characters. One s/</<=/ later, and now my tests are failing.

They're not just failing. They're segfaulting.

Now I've been doing all of my development on my new MacBook 13", 2017 edition (without the Touch Bar thank you very much). Say what you will about developing software on macOS, but I'll say this: the debugging facilities outright suck. No Valgrind. No American Fuzzy Lop. GDB requires some crazy workarounds.

So I take a quick detour to a random Linux cloud host that I keep around because sometimes it beats a sharp stick in the eye. There, arrayed before me (heh) are all my beautiful debugging tools; implements of master craftsmanship.

So I fire up Valgrind.

Okay, so that's bad. Apparently, my little test program is trying to tromp all over someone else's memory. This is an out-of-bounds memory access violation, which is just the kind of thing you expect Valgrind to find. Yay!

So now I just need to figure out who is setting the pointer to the errant address. I tracked the problem down to the next pointer on the strand implementation, and it only seems to manifest when we have to append the second strand.

As I am a proud printf debuggerer, I found all the places in the code where the next pointer is set, nullified, referenced, or even thought about, and I put in copious amounts of printf("next: %pn", x->next) calls. Fire up Valgrind again. Get the same error about an invalid read, 4 bytes into another variable's back yard. Same address too! But...

But. But none of the printf statements ever printed the value being accessed. That 0x52043d0 pointer address is literally only printed out by Valgrind itself. And Valgrind has no bugs, so this is one hell of a thinker.

Anyhow, it's time to go to my day job, so I switch off of that terminal tab and focus my mind on lesser demons like Go, and avoiding Slack, and tracking down people for pairing sessions.

The back of my head, however, can't stop working on this stupid problem. 0x52043d0 is slowly, maddeningly burning a hole into my brain. Teasing me. Taunting me. Tormenting me.

Yup. That's a segfault. Looks like it's actually dying on one of my printf()s. Time to look at this ins character (that's the insertion point on the strand, if you're curious).

Right. A pointer. Gotta dereference it.

Now that IS interesting. The next pointer is 0xb; not quite NULL (that would be 0x0), but definitely not high enough to be an actual pointer. Also, we have a data pointer of 0x31, which is also suspiciously low in the address space, and a len of 0 (no bytes in the strand).

All of this points to some sort of memory corruption. But where? Valgrind didn't indicate that anything else was off. These errors are all occurring when we append() to the parser's strand.

On a whim, I set a breakpoint in advance(), start the process over again, and when the breakpoint fires, I set a hardware watch on p->strand.

The lovely thing about hardware watch points is that GDB traps all changes to that memory address, and will dump us back into the debugger whenever they occur. For convenience, I cleared my breakpoint (don't need it anymore), and continue on.

Excellent. p->strand changed from 0x0 (no strand) to 0x604060, some bit of heap-allocated memory. Nothing unusual here; continuing on.

This is just the parser weaving the strands back together into a string and disposing of the (now unneeded) strands. Perfectly normal. GDB and I continue in this vein for a while, back and forth, NULL → !NULL, !NULL → NULL until a very curious thing happens.

Weird. The "and were out of bytes..." bit is the program indicating that it hit the end of the fixed-size read buffer, and is about to append to the strand. Normally, appending to the strand leaves p->strand alone (append happens at the end, modifying the terminus ->next pointer). But here, we've ... we've assigned an interesting value to the strand pointer.

It's exactly 96 bytes before the value it used to have.

That's weird for a variety of reasons. For starters, heap allocation usually works from lower to higher memory addresses as it chugs through the arena or the slab (depending on the allocator). Also, 96 bytes doesn't seem to match the sizeof() any of my structures (I checked).

On a whim (and perhaps to keep my fingers busy while my brain idled), I ran:

And stared at the output for a good five minutes. Realization dawns on me slowly, as I then decide to look at the parser structure itself, *p:

Everything clicks into place. The devious machinations and lewd gyrations this execution path has made come to the forefront of my mind. I dare say I heard a choir of angels sing out in a Hallelujah! of buffer overruniness.

See p->buf is the fixed-size buffer window. It's right next to p->strand in the memory layout, and because it's a nice round number (1024, 4096, 8192, all of them nice round numbers), there's no structure padding to maintain alignment.

Refer back to the last code listing we did. Notice that line 222 explicitly sets the p->used'th cell of p->buf to 0, which is a fancy string-like way of writing 0x00.

So we go from:

overwriting the least significant byte of our strand pointer. The next time we try to deal with the strand, we're going to fall short of 0x604060, and land in 0x604000, thanks to that misplaced NULL terminator.

Once I figured that out, I did a little bit of digging, scanning back up through the code listing:

Sure enough, there's the culprit. When we read() into the buffer, we fill it completely, using up every ounce of space. Then we advanced p->used forward, exactly the number of bytes we read. If there's more to be read than buffer space, p->used will EQUAL PBUFSIZ, which means that line 222 tries to assign the terminator beyond the end of the buffer.

(Admittedly this is why people discourage implementing much of anything in C. Personally, I live for this stuff.)

Mystery solved. A well-meaning bit of code to properly NULL-terminate a string buffer (probably for debugging or something) ran afoul of assumptions of previous code, and ended up munging a nearby pointer that was minding its own business.

Were it not for those hardware watch points in GDB, and Valgrind pointing to possible memory corruption, this bug could have entailed an excruciating line-by-line review of the codebase.