UPDATE: Geoff helpfully pointed out this morning that you can set the Warden netmask via the bare-metal.yml.example file. But that's no fun.

I recently spun up BOSH-lite on my lab server, thanks to the vagrant tweaks that Geoff Franks made against Ruben Koster's bare-metal-bosh-lite code.

With BOSH spinning, I put together a small testing BOSH release (which you can find here), and deployed it. The deployment worked fine, and soon I had some test VMs running as Warden containers on the server.

Problem is, the networking was all mismatched.

Anyone familiar with BOSH-lite is accustomed to the 10.244.0.0/16 network space that it uses by default. This convention over configuration approach has lead to lots of BOSH releases shipping a Warden configuration out-of-the-box that spins up static IPs in the 10.244 network. No problem; BOSH-lite is intended to be used for development.

For reasons I'll not go into right now (maybe a future blog post), I want to be able to run several bare-metal BOSH servers using Warden containers. I don't want to invest the money in vSphere, and I don't have the patience to stand up Openstack. That leaves AWS, which is too expensive for my ambitions, and a bit overkill.

Which is why I turned to BOSH + vagrant in the first place.

The problem I ran into had to do with routing. Here's a highly simplified view of the network topology inside of my lab: 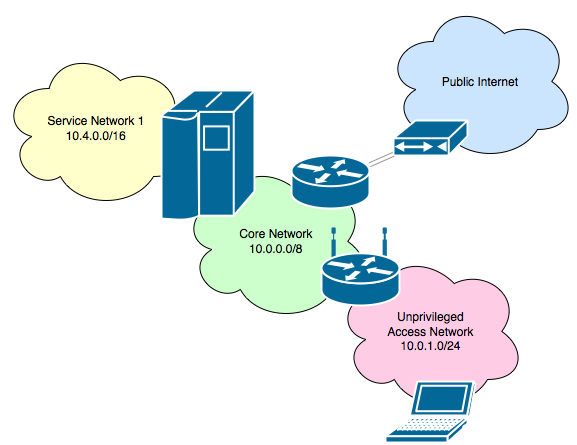 All wireless clients (laptops and phones included) live on the Unprivileged Access Network (the pink cloud), which routes everything to the Core Network (green) via a consumer-grade wireless router at 10.0.1.1.

The core network router is a Linksys WRT54G with a custom build of OpenWRT that allows it to manage routing, firewall duty, and termination of a handful of OpenVPN point-to-point VPNs that stitch my network into a larger one distributed across the Internet.

The important part of the diagram, however, is the 10.4.0.0/16 (yellow) network labeled "Service Network 1". This network exists entirely inside of the beefy server hardware that I am running BOSH-lite on. The Core Network OpenWRT router has static routes for the 10.4/16 subnet.

Unfortunately, that masks a not-so-subtle problem with the default configuration of BOSH-lite (which, as a develpoment platform, is not important enough to warrant discussion): you can't run more than one!

Just for fun, let's try changing the BOSH deployment manifest to use networks in 10.4/16, and see if it works!

You can try any number of different networks, but if they aren't in 10.244/16, BOSH (or more specifically, Warden) will fail to provision the network, claiming that it is "already acquired".

Luckily, while the decision to use 10.244/16 is hard-coded into the BOSH-lite/warden distribution, it is explicitly called out in exactly one place: the startup script that runs the Warden supervisor.

If you change line 35 to specify the -networkPool option as 10.0.0.0/8, and subsequently restart the Warden supervisor, you can provision against any subnet of 10/8, and even use different nets on different boxen.